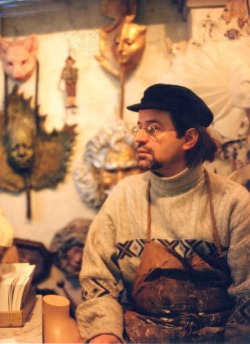 Agostino Dessì
Agostino Dessì was born in 1952 in the town of Serdiana, in Cagliari, Sardinia, (where masks are traditionally important, as evidenced by the “Mammutones” mask and the “Sartiglia” mask). As a young man he taught himself to make the typical local wooden masks, and at the same time he studied at the Artistic Lyceum at Cagliari.

Upon completion of his studies he travelled to Turin, to study at the Academy of Art, where he was fortunate to have the opportunity to collaborate with the informal sculptor, Professor Sandro Cherchi. This experience led to Agostino Dessì's first personal exhibition, in 1973, entitled  Totem and Mask  (at the Gold Square Gallery, Turin).

Originally, Agostino had intended to study at each of the best Italian academies, but when he arrived in Firenze, in the second year of his course, he found an ideal artistic atmosphere in this exceptional city of art, and he decided to remain. He then studied with the classical sculptors, Prof. Oscar Gallo and Prof. Chissotti, and had the opportunity to further develop his study of art based on reality.

Out of this work, Agostino perceived a need for better materials to support his art, and engaged in research for innovative materials, particularly the softer and more translucent papers and glues. At the beginning of the 80’s, taking his inspiration from the Carnivale of Venice, he created a range of groundbreaking masks: the Moons, the Suns, the Jollies, the Elves, the Satyres and Bacchus. These subsequently became very popular and the designs were then imitated by many other artisans in Firenze and elsewhere. In 1985 he collaborated in the making of the film ‘‘The Mask” directed by Fiorella Infasceli and produced by Best International Film of Rome and RAI 2. For this film Agostino created the amazing mask of the elf with the leaf, the mask of fire, the Venetian Bautes and the mask of the Japanese NO theatre. During the making of the film the producers realised the benefit of Agostino's earlier research into new materials, especially in regard to their lightness and resistance. Simultaneously, and since, Agostino has also collaborated with several acting companies, such as Magazzini Criminali (Scandicci, Firenze) and Peter Makal's City Theatre (Stuttgart, Germany).

In more recent years, whilst still producing works based on his already-known designs, Agostino has turned his attention to portrait-masks, which have their origins in the Venetian tradition of emulating public persons. Always beginning with reality, he creates several types based on common faces, elaborating only with decoration and the cut of the mask. In the process, he has developed several decorative techniques using materials such as fabric, lace, withered flowers and flowers in fabric. His work goes far beyond the usual definition of a mask , especially in the multiple compositions with several faces, which can become objects of interior decoration and are part of a broader artistic expression.

Since 1997, Agostino's daughter, Alice, has also been actively involved in their historic Florentine workshop,  organising "mask-making workshops" on the practical techniques of mask creation, with courses open to anybody who is an enthusiast of this type of art (during the last week of every month).

Those who know Agostino Dessì personally and who are familiar with his work, know just how much he seeks continuous evolution. Each object he encounters, especially the antique, is an inspiration for new subjects, techniques, colours and forms. Agostino Dessì’s pieces are not merely masks, they are also contemporary sculptures.

Thanks to Sean David Burke for translation. 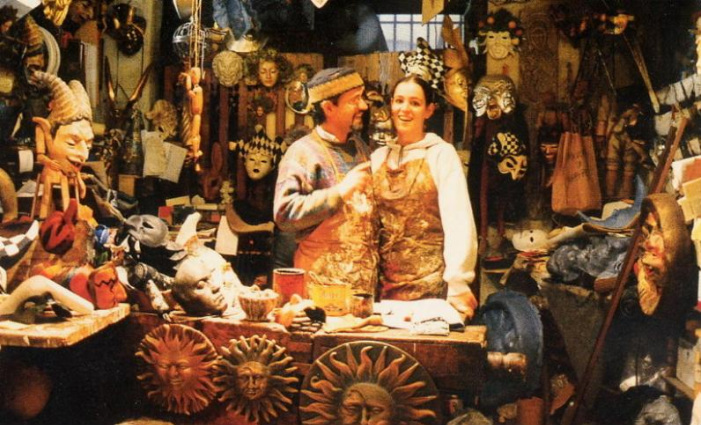 Agostino Dessì and his daughter Alice